Health care spending in the U.S. is already nearly twice as high as outlays from other wealthy nations. And it’s just going to get worse, as the U.S. government projects that total outlays will rise to $5.7 trillion in 2026, from $3.7 trillion last year.

Taming spiraling health care costs would require a top-down rethink of the U.S. health care/medical insurance industrial complex. Given that it’s not currently on any policymaking front burner, American households are left paying the price. Employers continue to pass more of the health insurance premium bill on to employees — for coverage that increasingly imposes higher deductibles, co-pays and co-insurance. Households insured through an ACA plan can also face significant costs unless they qualify for hefty subsidies.

With no top-down relief on the horizon, it would be in consumers’ best interest to do whatever they can to reduce or control their medical cash-flow burden. While many diseases and illnesses are beyond our control, we all know there are plenty of opportunities to help ourselves by committing to healthy behaviors.

That is especially important for the legions of pre-retirees who say they intend to work longer as a way to stretch their nest egg, in a world where living to 90 and beyond is no longer an outlier event.

Yet today’s retirees offer a sobering reality check on the work-longer solution. The Employee Benefits Research Institute’s annual retirement confidence survey reports that nearly 70 percent of pre-retirees say they want to work in some capacity in retirement. But in the same survey, just 26 percent of recent retirees report they continued to work in retirement. One of the main reasons people stop working earlier than expected is health problems.

While none of us needs any convincing of the multiple payoffs if we focus on healthful behaviors, finding the motivation to take on healthful habits is a vexing challenge. A central tenet of behavioral science is that we don’t intuitively gravitate toward delayed gratification. Our humanness makes it difficult to do something today for a benefit that is far off in the future.

Studies have shown that’s hard because we don’t naturally think about our future self 20, 30 or 40 years down the line. Behavioral research has been bearing down on whether lessening that disconnect and increasing our sense of “ future-self continuity” can help us make choices today that will be beneficial to our older selves.

Prior research conducted by UCLA Anderson’s Hal Hershfield and colleagues has established that mechanically coaxing individuals to think about or visualize their older self triggers behaviors today that will help their older self. In one experiment, college-age students that were shown aged photos of themselves committed to saving more for retirement. Another study found that the more we are connected to our future self, the more likely we are to behave ethically today.

While all future-self challenges are demanding, healthy behaviors, the researchers note, can be especially exasperating. “Saving money from a paycheck today instead of spending it immediately yields a larger sum in one’s bank account, and studying for a test in the preceding week can recognizably yield a better grade. Attending an exercise class today, however, does not lead to weight loss or improved fitness today [or] even in the near future. Conversely, forgoing a healthy behavior today does not hurt health immediately.”

In two lab experiments, the researchers set out to explore whether possessing “an overlap between selves at different points in time” can spur us to take up healthier habits today that will help us down the line.

In the first study, the researchers established a connection between perceived future-self continuity and self-reported levels of health. Nearly 200 participants were walked through some questions to determine their level of connectedness to their future selves. Then they were asked to complete the PROMIS Global Health Scale 10 assessment that measures physical and mental health. The research established that participants who self-reported a tighter bond to their future self scored higher on the health assessment.

With that correlation in place, the researchers set out to see if there was a way to nudge people to exercise more by increasing their connectedness to their future self.

The researchers recruited nearly 500 college students to record their exercise for either a two-day or 10-day period. Prior to the experiment, participants were asked to spend two minutes writing a letter to their future self. Half were prompted to write to their future self 20 years in the offing with the prompt: “Think about who you will be 20 years from now, and write about the person you are now, which topics are important and dear to you, and how you see your life.”

The control group wrote a letter to their near-future self 90 days hence.

That’s not going to get anyone into triathlon shape, but the researchers noted that the incremental increase “represents approximately one-sixth of the 150 min/week of exercise” and suggest that “this seemingly modest magnitude could have an important impact on public health.” 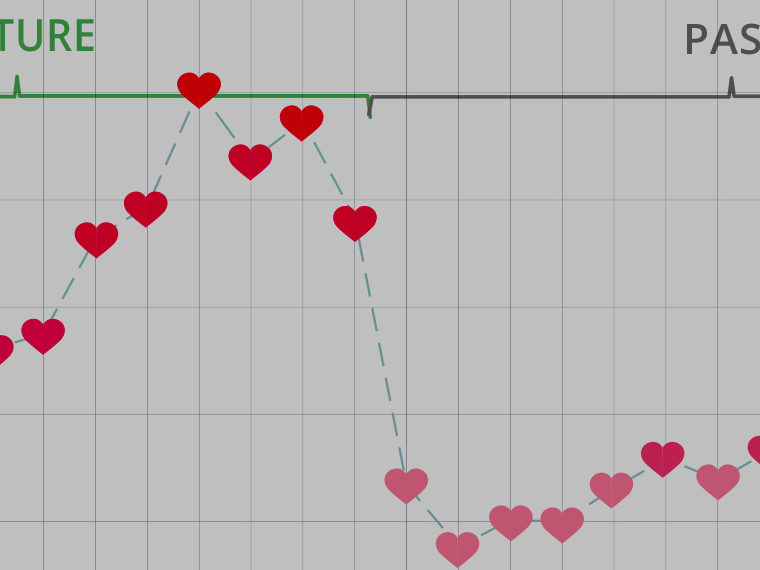 Our Envy of Prospective Events Is Greater Than of Those Past